Cutting Off the Cancer Fuel Supply 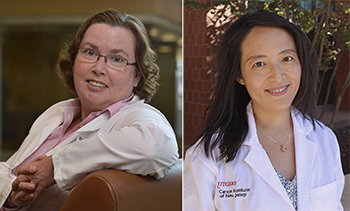 New Brunswick, N.J. – Research from investigators at Rutgers Cancer Institute of New Jersey and Princeton University has identified a new approach to cancer therapy in cutting off a cancer cell’s ‘fuel supply’ by targeting a cellular survival mechanism known as autophagy.  Rutgers Cancer Institute Deputy Director Eileen P. White, PhD, distinguished professor of molecular biology and biochemistry in the School of Arts and Sciences at Rutgers, The State University of New Jersey, and Rutgers Cancer Institute researcher ‘Jessie’ Yanxiang Guo, PhD, assistant professor of medicine at Rutgers Robert Wood Johnson Medical School, are the co-corresponding authors of the work published in the August 10 edition of Genes & Development (doi: 10.1101/gad.283416.116). They share more about the research, which focused on lung cancers driven by the Kras protein:

Q: Why is this topic important to explore?

A: Between 85 to 90 percent of lung cancers are non-small-cell lung cancer (NSCLC), and response to standard treatment is typically poor. Some subsets of patients with metastatic disease have seen improved survival thanks to recently developed therapies that target particular lung cancer mutations in the EGFR, MAPK, and PI3K signaling pathways. Mutations in the Ras protein family – including Kras – are frequently detected in NSCLC, but drugs directly targeting Ras mutations in NSCLC have not been effective. Understanding the critical cellular process of autophagy and its role in Kras-driven tumor cells may lead to new therapeutic approaches for NSCLC.

Q: What is autophagy and how does this process relate to what we already know?

A: Cells eat themselves in times of starvation and stress by a process called autophagy. It was long believed that autophagy allows cells to digest and recycle part of themselves to support their metabolism and survive interruptions in their supply of nutrients.   But whether this is true, and what the recycling was needed for, was not known. Cancer cells turn on autophagy and use it to survive too, even more so than normal cells.  Previously, the White and Guo groups discovered that cancer cells activated by the Ras protein family require autophagy for cell maintenance, metabolic stress tolerance and tumor development. When Ras proteins are ‘switched on,’ they have the ability to turn on other proteins that can activate genes responsible for cell growth and survival. Therefore, understanding what autophagy does can reveal an inherent weakness exploitable for cancer therapy.

Q:  How did your team approach the work and what did you learn?

A:  The Guo, Chang and White groups at Rutgers worked together with the Rabinowitz group at Princeton University to find out how autophagy enables cancer cells to survive stress. Using the tumor derived cell lines generated from genetically engineered mouse models for Kras-driven NSCLC, we traced the path of intracellular components cannibalized by autophagy through an analytical laboratory technique known as mass spectroscopy. We found that cancer cells do indeed breakdown and recycle themselves to survive starvation. This cannibalization of cellular parts provides fuel to the powerhouses of the cell, the mitochondria, to maintain their energy levels.  Thus, blocking autophagy cuts off the fuel supply to the powerhouses, creating and energy crisis and ultimately cancer cell death.

Q: What is the implication of this finding?