What is a Lung Nodule?

Learn about our Physicians 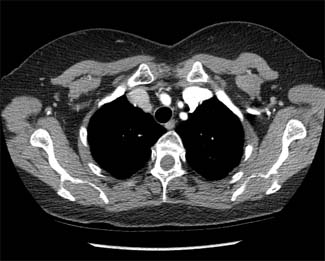 Learn about our screening program
to promote early detection for those at high risk of developing lung cancer.

Radiation therapy is precisely directed high-energy beams that can kill cancer cells. Proper dosing of the radiation requires the expertise of highly trained radiation oncologists, physicists, and dosimetrists such as those available at the Lung Cancer/Thoracic Oncology Program at Rutgers Cancer Institute of New Jersey.

The dosage, choice of technique (3D conformal, IMRT, SBRT), and number of treatments depends on the stage of the lung cancer. Radiation therapy can be a powerful treatment option for cancer that has high success rates.  It can be offered to lung cancer patients in various stages to help cure, control, and reduce symptoms from the cancer.

Surgery has been the "gold standard" for the treatment of early stage lung cancer. However, some people may not be surgical candidates for a variety of reasons including very severe Chronic Obstructive Pulmonary Disease (COPD).  Stereotactic body radiotherapy (SBRT) has been shown to be a good alternative for those patients. SBRT delivers a highly conformal dose of radiation to tumor and higher dose per fraction over a shorter period of time compared to conventional radiotherapy (e.g., three to five days vs six weeks). SBRT can be delivered with a variety of modern treatment systems, including linear accelerators such as Truebeam, Halcyon, and Edge of Varian Medical Systems, Versa HD and Infinity HD of Elekta, Cyberknife and Tomotherapy of Accuray. The SBRT technology at the Cancer Institute can not only see the tumor and adjust for movement but also delivers SBRT treatment very efficiently.

Stereotactic radiation requires extra precision to treat tumors, since lung cancer tumors can move with breathing. At Rutgers Cancer Institute of New Jersey, we have the best equipment and most experiences in New Jersey to be able to deliver this therapy with excellent results. The doctors who deliver this therapy have been involved in national panels to help design SBRT treatment trials and guidelines.

A multi-disciplinary group of doctors at the Rutgers Cancer Institute will review your case to ensure stereotactic radiation is the best therapy for you. This type of therapy should not be used for patients who may be best treated with surgery, tumors greater than five cm, and close to a major organ. Our team of national leaders in the field of lung cancer consists of surgeons, medical oncologist, radiation oncologist, radiologists, and pulmonologists.

Locally advanced disease is a tumor that is no longer confined to one area within the lung but has spread to other areas within the chest, which includes lymph nodes.  Since the tumor has not spread outside the chest it can be controlled with radiation therapy. Many patients with locally advanced disease will require both chemotherapy and radiation. Some patients with locally advanced disease could also be candidates for surgery. Radiation therapy in these cases may require daily treatments (five times weekly) over several weeks.  Our team utilizes the best equipment available to deliver the most accurate and safest treatment.

Some patients present or develop advanced disease with tumors spreading outside of the chest (metastasis, stage IV) to other organs that includes the brain, bone, liver, adrenal glands and lung, which may benefit from radiation therapy.  Radiation therapy may be used to relieve symptoms or prevent the development of unwanted symptoms.

GammaKnife is stereotactic radiation that is sometime used to deliver precisely focused radiation to tumors in the brain. Gammaknife is a one-day session with a single high-dose of radiation.