What are some advantages of CAR T-cell therapy?

What is CAR T-Cell Therapy?

Clinical trials in blood cancers have shown that even in patients whose cancer came back after multiple treatments, CAR T-cell therapy helped them achieve remissions that lasted for years. Others can live longer without their cancer getting worse, and in some cases can then benefit from curative cancer treatment such as stem cell transplantation.

CAR T-cell therapy is also a “living drug”, and its benefits can last for many years. Since the cells can persist in the body long-term, they may recognize and attack cancer cells if and when there’s a relapse. The data is still evolving, but after 15 months, 42% of adult lymphoma patients who received CD19 CAR T-cell therapy were still in remission. And two-thirds of childhood acute lymphoblastic leukemia patients were still in remission after six months. These are patients whose cancers were deemed very aggressive and for whom other standards of care had failed. 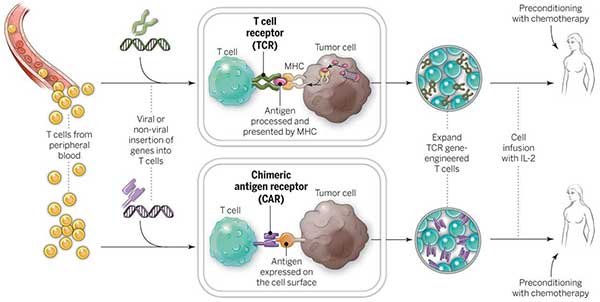 CAR T cells and TCR T cells are engineered to produce special receptors on their surfaces. They are then expanded in the laboratory and returned to the patient. Credit: National Cancer Institute