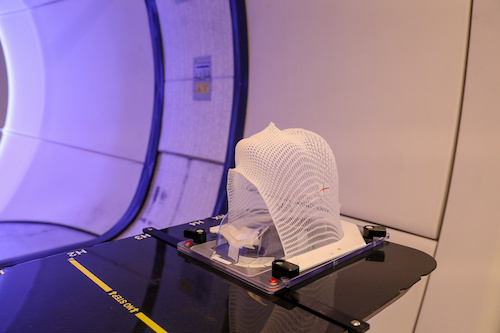 We are only facility in New Jersey that is a member of the North American Gamma Knife Consortium.

The Gamma Knife is not a regular knife. There are no blades and the physician does not make any incisions in your head. Instead, the Gamma Knife uses radiation. This approach, known as radiosurgery, focuses radiation directly, and very precisely, on the targeted area of the brain without affecting surrounding healthy tissue.

The radiation source used is called cobalt-60. There are approximately 192 sources of cobalt-60 loaded within the Gamma Knife unit. Thousands of radiation beams can be generated with a level of accuracy of more than 0.5mm, about the thickness of a strand of hair. Individually, each radiation beam is too weak to damage the normal tissues it crosses on the way to the target. But when focused precisely on that target, the beams intersect and the combined radiation is sufficient to treat the targeted area.

Because Gamma Knife radiosurgery is so accurate, the full dose of radiation can be delivered during a single session, compared with multiple visits for linear accelerator (linac) treatments, which use lower doses delivered in fractions (fractionated treatment).

Since no incision is made, the patient’s head does not need to be shaved, and the risk of surgical complications is low. Patients may experience side effects, but they are often very mild. Headache, dizziness, seizures or nausea may be experienced immediately after the treatment, but the effects will disappear soon after the procedure.

The following is a partial list of conditions treated using the Gamma Knife at Rutgers Cancer Institute and Robert Wood Johnson University Hospital:

Over the years, Gamma Knife has been refined and improved with advances in engineering radiation physics, robotic controls and computerized treatment planning. Perfexion, the latest version of the technology, exceeds the performance of previous Gamma Knife versions with increased patient comfort and reduced treatment times.

For more information or to find out if Gamma Knife might be a good treatment option for you, please call 732-418-8002.