Multiple Endocrine Neoplasia Type I (MEN1) is a familial cancer syndrome defined by tumor formation in distinct endocrine tissues while not in other parts of the body.  Patients with MEN1 syndrome develop tumors of the endocrine glands, including the anterior pituitary, parathyroid and endocrine pancreas.  Mutations in the gene MEN1 cause inactivation of the menin protein, which is a transcriptional modulator and tumor suppressor involved in cell proliferation, DNA repair and apoptosis.  Epigenetic alterations are a critical mechanism of tumorigenesis, including widespread aberrations in DNA methylation.  Our team has shown that the inactivation of menin results in increased activity of DNA methyltransferase 1 (DNMT1), causing a drastic increase in global DNA methylation in tumor cells.  With a focus on characterizing the role of Dnmt1 in pancreatic islet cells, which in MEN1 patients form an insulinoma, our recent work using a somatic gene transfer system in mice showed that the upregulation of Dnmt1 promotes the proliferation of pancreatic endocrine islet cells.  These findings suggest the significance of Dnmt1 in driving pancreatic neuroendocrine tumorigenesis, making Dnmt1 a potential therapeutic target for patients with MEN1 syndrome.

Another arm of the lab focuses on the immune system, specifically a new B7 immune-checkpoint protein as a target for the treatment of neuroendocrine tumors (NETs). The B7 family are an appealing target for cancer therapy because they are major immune checkpoint proteins that regulate T-cell activation and function.  Our recent analysis of patient samples and our work in our genetically engineered Men1 knockout mice demonstrates that B7x is a key mediator of tumor immunity in the tumor microenvironment of NETs.  In our preclinical studies where we evaluated the efficacy of B7x blockade with a B7x antibody, we found that the B7x antibody can inhibit tumor cell proliferation and induce apoptosis, both of which improved the tumor immune microenvironment and resulted in increased survival.  Our work has shown that the upregulation of the B7x immune checkpoint results in the inactivation of the immune system and promotes neuroendocrine tumorigenesis, and targeting B7x with a high affinity antibody is a promising cancer immunotherapy. 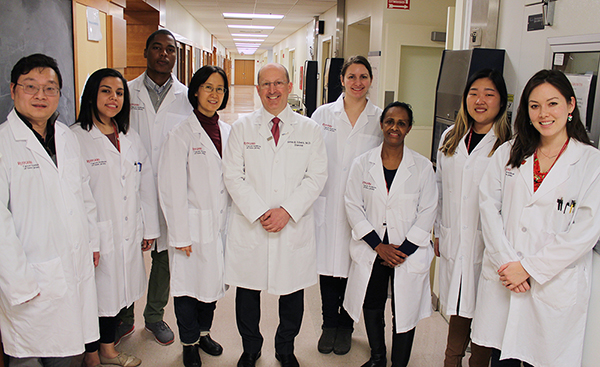 Another research focus is to study the mechanism of action of a novel tumor suppressor, FILIP1L that enhances b-catenin degradation, thereby inhibiting WNT signaling and epithelial-to-mesenchymal transition (EMT). We showed that its expression is down-regulated by promoter methylation in various cancer types, and its down-regulation is associated with chemo-resistance and worse prognosis in colon and ovarian cancer. Recent data reveals that systemic knockout of Filip1l was embryonic lethal in mice, suggesting its crucial role in development. Currently we are in the process of analyzing the phenotypes from various tissue-specific knockout mice of Filip1l.