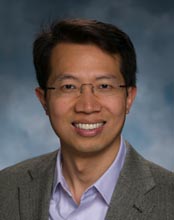 Chang S. Chan, PhD, is an associate professor of Medicine at Rutgers Robert Wood Johnson Medical School and associate director of the Center for Systems and Computational Biology at Rutgers Cancer Institute of New Jersey.

Chan has developed and applied quantitative methods to the analysis of genomic, transcriptomic and epigenomic data. He has studied the role of tumor suppressor p53 in cancer progression in Li-Fraumeni syndrome, tumors, and mouse models. He has developed a model called genetic regression to explain the apparent anticipation found in Li-Fraumeni syndrome and other inheritable diseases with variable age of onset. He continues to use large datasets and models to bring insights into the biology of cancer.