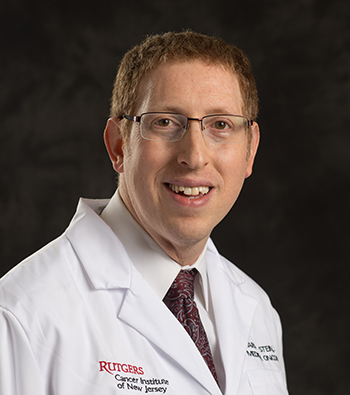 At focus is the investigational drug ONC201 that targets a dopamine receptor, a member of the G protein-coupled receptor superfamily residing on the surface of cancer cells, to cause their destruction. ONC201 is the first of a new family of therapeutic compounds called imipridones. Previous research on the study drug conducted by Rutgers Cancer Institute and Oncoceutics, Inc. – which is also supporting this trial – suggests that ONC201 may be capable of turning off proteins that maintain tumor growth and and may help kill cancer cells while sparing normal ones.  Pre-clinical study demonstrated ONC201 was effective in laboratory models against a number of solid tumors including colon cancer, brain cancer, triple-negative breast cancer and non-small cell lung cancer.

In this phase I dose-escalation study, 10 patients over age 18 with advanced solid tumors that were resistant to standard therapies were enrolled through Rutgers Cancer Institute between January and July 2015. Participants received a starting dose of 125mg of the study drug, which was taken orally via capsule every 21 days (one cycle). The dosage for this cohort was increased incrementally up to a maximum dose of 625mg, which is five-fold above the dose that was effective in laboratory models. An additional 18 patients were enrolled in an expansion phase between August 2015 and February 2016 and treated at the recommended phase II dose of 625mg in order to collect additional safety, pharmacokinetic and pharmacodynamic information.

There were no drug-related adverse events over Grade 1 in either the dose escalation phase or the expansion phase. The few low grade events that were recorded (nausea, fever) were resolved quickly, note the authors.  While the study achieved the aim of identifying the recommended phase II dose of the drug, findings also showed tumor regression in patients with metastatic disease. Results also demonstrated prolonged stable disease following more than nine cycles (27 weeks) of treatment – particularly in prostate and endometrial cancer patients that had lymph node, bone and lung lesion involvement. Out of the 28 participants, 10 completed at least four cycles of treatment with two patients receiving at least nine cycles. The authors note while a 90-year old prostate cancer patient saw his primary tumor and metastatic bone lesion shrink by about 25 percent after taking two 625mg doses of ONC201, a 72-year old patient with advanced clear cell endometrial cancer had a mixed response after two doses, with multiple nodes decreasing by more than 30 percent but experiencing the development of new nodes.

“By exploring a novel agent that targets the cancer but leaves non-cancerous tissue untouched, we have an opportunity to not only provide a new treatment option for patients who have exhausted standard forms of therapy without the typical toxicities associated with anticancer treatment, but to also offer them a therapeutic that may result in a better quality of life since healthy cells are not impacted,” notes Rutgers Cancer Institute medical oncologist Mark Stein, MD, who is an associate professor of medicine at Rutgers Robert Wood Johnson Medical School and lead investigator of the work. “While meaningful to confirm the safety profile of this dosage for ONC201, it is noteworthy that our findings also showed some evidence of clinical benefit to some patients.”