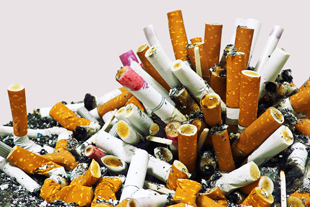 New Brunswick, N.J. – In what is believed to be a first of its kind study, a research member at The Cancer Institute of New Jersey and colleagues have found that an accelerating trend of smokers relighting cigarettes is related to economic factors, and the practice has implications for tobacco dependence treatment and policy. Results were given at a poster presentation during the 19th Annual Meeting of the Society for Research on Nicotine and Tobacco held this past week in Boston. The Cancer Institute of New Jersey is a Center of Excellence of the University of Medicine and Dentistry of New Jersey-Robert Wood Johnson Medical School.

In these difficult economic times, increasing numbers of smokers have been smoking fewer cigarettes per day but are relighting the end portion of the cigarette that is typically discarded. Investigators explored this behavior, examining a cross-sectional sample of 496 smokers seeking treatment from the Tobacco Dependence Program, which is supported by The Cancer Institute of New Jersey, the UMDNJ-School of Public Health and the UMDNJ-Robert Wood Johnson Medical School and provides help on quitting tobacco use through treatment, education, research, and advocacy.

What researchers found was that 46 percent of the sample reported relighting cigarettes. This group was found to smoke on average, fewer cigarettes per day – 16 versus 20 - than the group that did not relight.

A reduction in the amount of cigarettes smoked per day may sound positive, but there is more to the story, according to Michael Steinberg, MD, MPH, FACP, a member of The Cancer Institute of New Jersey and director of the Tobacco Dependence Program, who is the senior author of the research. “Despite those engaging in the relighting practice smoking fewer cigarettes, there is no estimated reduction in their exposure to toxins,” says Steinberg.  “In fact, smokers who relight cigarettes may be at higher risk of lung cancer and chronic bronchitis.  That is something of which policy makers need to be aware,” he notes.

Significantly higher rates of relighting were found among females, African-Americans, and smokers who are divorced, widowed or separated. The behavior was more prevalent among smokers who started at a younger age, have fewer cigarettes per day, smoke menthol cigarettes and wake up at night to smoke. Other factors significantly related to relighting include being unemployed, sick or disabled, or having a high school degree or less.

“While the relighting of cigarettes is a relatively unexplored smoking behavior, it was anticipated that certain economic characteristics, such as lower education and lack of employment, would be related to a higher level of relighting,” says Dr. Steinberg, who is also an associate professor of medicine at UMDNJ-Robert Wood Johnson Medical School and an associate professor of health education and behavioral science at UMDNJ-School of Public Health. “We were however, surprised that women are more likely to engage in this practice than men. This needs further study,” he adds.

Steinberg and colleagues suggest key components of tobacco dependence treatment that could be affected by these findings include the dosage of medicines prescribed and the identification of unique triggers for the relighting behavior, which could impact counseling and intervention methods.

The study is supported by pilot funding through The Cancer Institute of New Jersey.