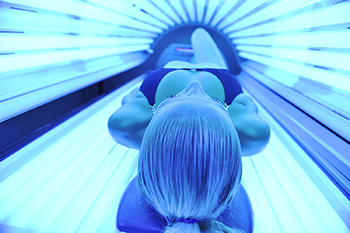 New Brunswick, N.J. – A web-based intervention targeted toward young, female users of indoor tanning beds has tested favorably among these users and may encourage cessation of this behavior. That is according to research by Rutgers Cancer Institute of New Jersey which tested an intervention that targeted users’ perceptions of the benefits and value of tanning as well as encouraged them to consider how tanning was related to their body image.

“We believe this online intervention is the first to demonstrate an ability to reduce indoor tanning through engaging participants to reflect on and challenge their belief and the personal value placed on tanning,” notes lead author Jerod L. Stapleton, PhD, behavioral scientist at Rutgers Cancer Institute of New Jersey and assistant professor of medicine at Rutgers Robert Wood Johnson Medical School.

Indoor tanning beds that emit artificial ultraviolet (UV) radiation are implicated in an estimated 450,000 cases of non-melanoma skin cancer and 11,200 cases of melanoma each year in the U.S., parts of Europe and Australia (Wehner, et al., 2012). Research has shown that some who participate in this practice do so to look attractive and healthy.  The 2014 Surgeon General’s Call to Action to Prevent Skin Cancer report highlighted a need for interventions to address the underlying behaviors of indoor tanning including a young woman’s desire to look beautiful.  Investigators at the Cancer Institute of New Jersey focused their efforts on a web-based intervention method targeting this population.

The research, which appears in the current online edition of Health Psychology (http://dx.doi.org/10.1037/hea0000254), looked at 186 young women (mean age 20) from Rutgers University who reported engaging in indoor tanning at least once in the previous 12 months.  Participants were randomized into two groups. One was asked to complete a baseline assessment, followed two weeks later by a viewing and evaluation of the online intervention, then a follow-up assessment six weeks after the intervention.  The control group did not view the online intervention after they completed the baseline assessment and follow-up assessment. All assessments were completed between December 2013 and May 2014.

Overall, participants provided favorable ratings on all aspects of the intervention and the mean overall rating of the intervention was an 8.5 (with 10 being the most favorable response option).  “What our findings show is that a web-based indoor tanning intervention is well received and can lead to reduction of this behavior, although additional study is warranted. Prior indoor tanning interventions have been delivered through other mechanisms, such as print. A web-based method may be more likely to appeal to the target audience of young women and could easily be integrated into mobile technology, social media platforms and other web-based content,” said Dr. Stapleton.

The web-based intervention contained psychoeducational content and thought exercises designed to encourage participants to address their beliefs and values on indoor tanning in relation to their body image and influences from media and peers.  Identifying a goal and a plan to change indoor tanning behavior was also addressed, and participants were encouraged to list best personal attributes to combat negative body image.  Participants also were asked to consider alternative appearance behaviors that could be used instead of engaging in indoor tanning.

In the follow-up assessment, participants were asked about their indoor tanning behavior since the prior assessment as well as how likely they were to use indoor tanning in the next year.  Participants also were asked to rate the online intervention overall based on four aspects: interesting, understandable, useful and positive – and were asked if they would recommend the intervention to a friend if publicly available.

The authors note there were limitations to the study, including self-reporting of indoor tanning behavior, which may have prompted intervention participants to respond more favorably to appease researchers.  They note future research should also address how the intervention works for subgroups of indoor tanners and also to examine whether intervention efficacy differs based on the level of risk knowledge participants have prior to taking part in an intervention.