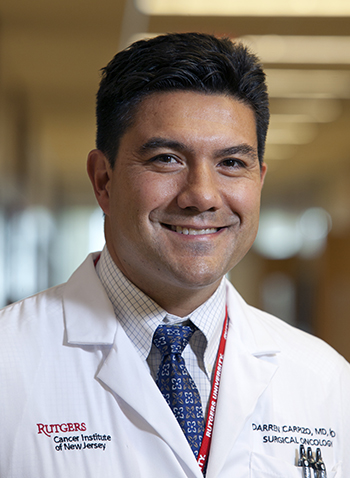 Pancreatic cancer suffers from a lack of effective chemotherapy, highlighting the urgent need for new therapeutics. Most patients (85 percent) with pancreatic cancer have locally advanced or metastatic disease (stage 4) at the time of diagnosis – meaning their tumor has spread just outside their pancreas or distantly to other organs. While surgery remains the only chance for long-term survival, more than 75 percent of patients undergoing surgery for pancreatic cancer will die of metastatic recurrent disease.

Recently, new research in the science of pancreatic cancer has revealed genetic changes that are important for the survival of metastatic cells. One such biological event is activation of the Netrin-1 protein signaling pathway. Netrin-1 functions as a survival signal to cancer cells, so without Netrin-1, cancer cells die.

“This is important because therapies that target Netrin-1 would in theory kill cancer cells by depriving them of this survival mechanism,” notes Carpizo, who is an associate professor of surgery and pharmacology at Rutgers Robert Wood Johnson Medical School.

The duo aims to confirm this idea in mouse models of pancreatic cancer. “There is evidence that anti-Netrin-1 therapy also makes chemotherapy work better, and we will test this idea as well in a mouse model of pancreatic cancer. We also will determine whether this treatment strategy would be best suited for patients with metastatic disease or those with early-stage disease who are candidates for surgery. I am grateful to the Pancreatic Cancer Action Network for its support of this very important work,” notes Carpizo, who was also the 2012 recipient of a Pancreatic Cancer Action Network Career Development Award funded by the Daniel and Janet Mordecai Foundation.

The project period runs through June 2020.

Along with world-class treatment, which is often fueled by on-site research conducted in Rutgers Cancer Institute laboratories, patients and their families also can seek cancer preventative services and education resources throughout the Rutgers Cancer Institute and RWJBarnabas Health footprint statewide. To make a tax-deductible gift to support the Cancer Institute of New Jersey, call 848-932-8013 or visit www.cinj.org/giving. Follow us on Facebook at www.facebook.com/TheCINJ.