The year 2020 was an unprecedented year that hit us with surprises and serious, painful disease. Individuals lost jobs, got sick, and many died due to COVID-19. No doubt about it: 2020 was a very bad year.

But 2020 had its bright spots too. Just ask Tennica Johnson-Campbell. “Yes, it was a tough year and I was glad to see it end,” she says. “But as bad as it was, I had some good things happen—CAR T-cell therapy being at the top of the list. It’s given me my life back.”

With her huge smile, upbeat attitude, and wonderful sense of humor, she looks like she does not have a care in the world. But looks can be deceiving. This 52-year-old faces many challenges. One of them is ensuring that her 14-year-old son Jordan, born with cerebral palsy, has everything he needs to live a happy, healthy life. Jordan has developmental delays and goes to a school that offers him physical, occupational and speech therapy. But for the last year, Johnson-Campbell, like millions of parents across the country, had to teach Jordan at home. “It’s been hard,” she admits. “I like to say I specialize in being the mom of a kid with special needs. But I’m not a teacher, let alone a special education teacher! My husband George and I, we’re in this together as a team. We do our best.” 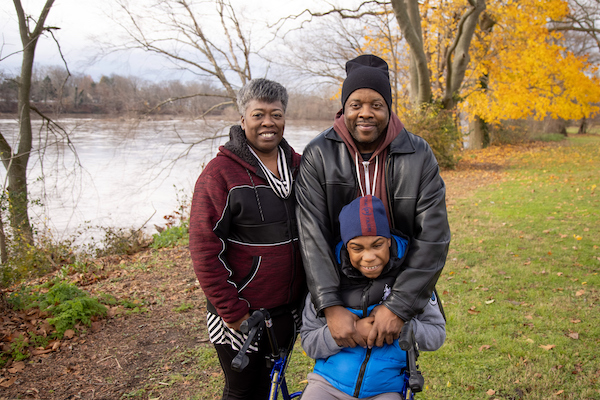 Tennica Johnson-Campbell with her ‘team:’ husband George and son Jordan.

Johnson-Campbell has faced another challenge, one that’s life-threatening. In August 2018, she was diagnosed with multiple myeloma. She was referred to Rutgers Cancer Institute of New Jersey, where she was treated with chemotherapy, a stem cell transplant, and maintenance therapy. Unfortunately, her disease progressed. With a poor prognosis, she received a lifesaving new treatment called CAR T-cell therapy, which uses the body’s own immune cells to attack cancer cells.

CAR T-cell therapy offers physicians a powerful new weapon against cancer. Because it is a highly personalized treatment, it is available at a limited number of cancer centers with specialized expertise in cellular therapies. Rutgers Cancer Institute, in partnership with Robert Wood Johnson University Hospital (RWJUH), is one of only two programs in the state to offer CAR T-cell therapy.

While CAR T-cell therapy has helped many cancer patients, it is not yet approved by the U.S. Food and Drug Administration for multiple myeloma. It is available for these patients only on a clinical trial. Fortunately for Johnson-Campbell, Rutgers Cancer Institute is one of a number of institutions around the world participating in such a trial.

In August 2020, Johnson-Campbell became the first multiple myeloma patient to undergo CAR T-cell therapy at RWJUH/ Rutgers Cancer Institute. “I was nervous about being the first, and also somewhat skeptical,” she says. “But after failing a few chemo treatments, I figured, why not give it a try? And I’m glad I did.”

Johnson-Campbell’s health problems began in June 2018. Between her full-time work at an auto insurance company and caring for Jordan, her plate was full. “I started feeling very weak, tired, and short of breath,” she notes. “I’d go to the basement to put clothes in the washer. By the time I got upstairs to the kitchen, I was so winded I had to sit down and catch my breath.” As it grew worse, she was hospitalized a few times for weakness and fatigue, sometimes combined with severe vomiting. Still, it never dawned on her that she had a serious illness.

Walking across the street from the parking lot to her workplace one day, her heart was beating so fast she was afraid she’d pass out. “I sat in my cubicle gasping for air,” she recalls. “My supervisor asked, ‘What’s wrong? Were you running? You’re not even late.’ I said I was having breathing issues. She told me to stay home tomorrow and get it checked out.”

The next day Johnson-Campbell went to the hospital’s emergency department. She was admitted and underwent a series of tests. A few days after her discharge, her physician called and asked her to come into the office so he could give her the test results. “My heart sank,” she says. “I knew it must be bad, if he couldn’t tell me over the phone."

With her sister Robin by her side for moral support, Johnson-Campbell learned she had multiple myeloma, a cancer that forms in the body’s plasma cells located in the bone marrow. 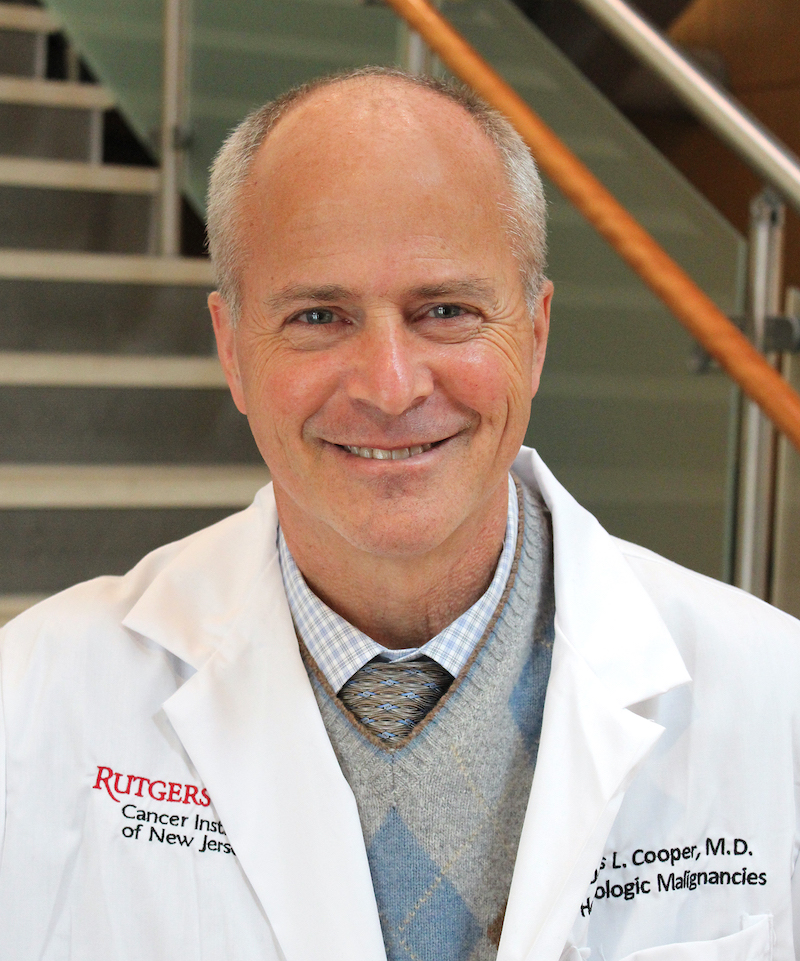 Because of signs of more aggressive disease, Dennis Cooper, MD, (above) chief of Blood and Marrow Transplantation at Rutgers Cancer Institute, considered CAR T-cell therapy for Tennica Johnson-Campbell. “We thought she’d be a very good candidate.”

She was referred to Dennis Cooper, MD, chief of Blood and Marrow Transplantation at Rutgers Cancer Institute and a professor of medicine at Rutgers Robert Wood Johnson Medical School. His areas of clinical expertise include multiple myeloma, Hodgkin lymphoma, and non-Hodgkin lymphoma, and he’s known for his innovative work in stem cell transplant.

“Everyone at the hospital told me Dr. Cooper and Rutgers Cancer Institute were the very best,” she says. “Once I got over my boo-hoo party, I felt more optimistic.”

Johnson-Campbell saw Dr. Cooper in August 2018. She says, “His first comment was, ‘Wow. You don’t look as sick as your numbers indicate.’ I asked him if there was a cure for this. He answered, ‘Not yet.’ I took that to mean: not at this very moment, but I don’t want you give up hope that there will be a cure.”

Cooper’s course of treatment began with standard first-line chemotherapy. “We achieved a very good response,” he says. “We followed that with high-dose therapy and autologous stem cell transplant. She had a near-complete response and was then started on a maintenance therapy. But her disease started to progress, so she was put on another treatment.”

Cooper explains that the early progression after transplant and the brief response to her subsequent treatment were signs of more aggressive disease. “Because of these factors, we began to consider CAR T-cell therapy, a treatment that works differently from conventional therapies. We thought she’d be a very good candidate.”

CAR T-cell therapy is a personalized immunotherapy that utilizes the power of the body’s immune system to fight cancer. Patients first undergo a procedure called leukapheresis, in which their lymphocytes are collected in a process similar to dialysis. The cells are sent to a laboratory to be re-engineered so that they are programmed to attack a target on the lymphoma cells but not on normal cells. They are then infused back into the patient’s body to do their work.

Cooper told Johnson-Campbell that the treatment was investigational. “I thought, ‘What did I have to lose?’ I’m trying to get rid of this cancer. If I can be part of a solution that might help others, let’s go for it.”

As the COVID-19 pandemic intensified, Johnson-Campbell prepared for her procedure while struggling to keep up with Jordan’s virtual schooling and therapies. As if all this wasn’t enough, her husband was diagnosed with prostate cancer. He too would need treatment. “What more could happen?” she asks. “We just put our heads down and tried to get through this. George put off his treatment until mine was finished.”

The week before her CAR T-cell procedure was a busy one. Prior to receiving the re-engineered cells, patients receive a relatively mild pre-treatment chemotherapy to clear the blood of lymphocytes that could compete with the infused CAR T-cells. Johnson-Campbell experienced some nausea that was treated with medication.

She received CAR T-cell therapy at RWJUH/Rutgers Cancer Institute on August 3, 2020. “The nurses were wonderful and explained every step to me,” she says. “I’ll admit, I was nervous. I felt a tingling sensation when the cells went in, but maybe that was my imagination. The whole thing was over so quickly. The actual infusion only took about ten minutes.”

She remained in the hospital for two weeks. Other than a slight fever around the eighth day, she had no side effects. Because of COVID-19, no visitors were allowed in the hospital. “This turned out to be a blessing, because it allowed me to rest and just focus on myself and my own recovery,” she says. 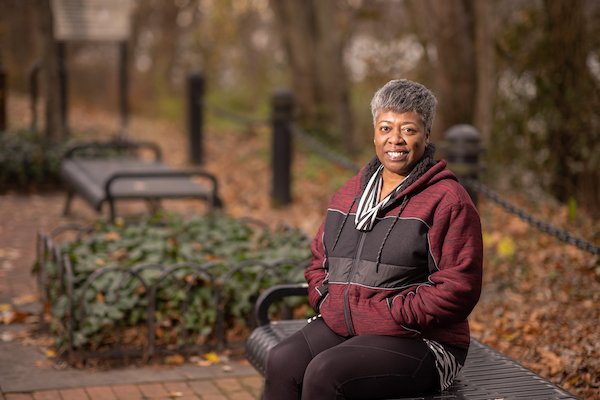 A few weeks after she went home her husband began his prostate cancer treatment. That’s now finished and he is doing well.

Johnson-Campbell returns to Cooper’s office and the Multiple Myeloma Center of Excellence for regular checkups and tests, including bone marrow biopsy. As of now, she is free of cancer. “Blood tests and bone marrow exams show no evidence of disease,” says Cooper. “It’s remarkable, given that her bone marrow showed extensive disease just before her treatment. We are hopeful that her remission will be much longer, as she did not have a long list of treatments before she received the CAR T-cells.”

For now, Johnson-Campbell takes life one day at a time. “I feel great,” she says. “Out of all the treatments I’ve been through, CAR T is by far the best, especially in terms of side effects. With the chemotherapy I had bad neuropathy, tingling in my hands and feet. Having a special needs child, you’re on your feet all day. That was a terrible time for me. I haven’t had any lasting side effects with CAR T.”

She faces her future with euphoria, tempered by a trace of anxiety. “Sometimes it all seems too good to be true,” she notes. “I worry about how long the cells will continue to do their job. But Dr. Cooper and the hospital team are fantastic at keeping me comfortable and well-informed. They are so reassuring. That means the world to me.”